Albon: I want to mix it at the front next year! 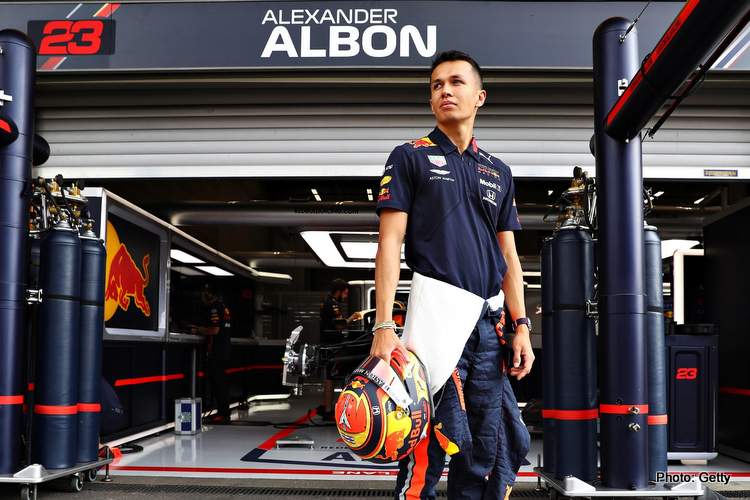 2019 Formula 1 Rookie of the Year Alex Albon says he is looking forward to a more normal second season in the top flight after his high-pressure first season and as a result aims to be a podium contender in 2020.

The 23-year-old Thai rookie had a rollercoaster ride in 2019. It began as the ditched Red Bull junior found refuge in Formula E, but then out of the blue Helmut Marko came knocking with a Toro Rosso contract.

Albon made his debut at the season-opening Australian Grand Prix in March and, in a tale well told, he replaced Pierre Gasly in the senior team, alongside Max Verstappen, from Spa-Francorchamps onwards.

In his season-end review, he recalled, “I’m feeling that next year will be a bit more normal. This year was my first year and it definitely wasn’t normal. It was also my first year with Honda and the relationship is incredible. The work rate and chemistry between everyone just shows the passion that we all have.”

Thrust into the white hot spotlight of a Top Three team, the 23-year-old suddenly found himself at the daunting Spa-Francorchamps making his debut as a Red Bull driver with formidable Verstappen as his teammate.

While unable to match the Dutchman toe-to-toe, Albon stuck to learning the ropes, mixing it among the top six, albeit at the wrong end of the sextet capable of winning in this era.

Nevertheless, compared to more experienced Gasly, who he replaced, the guy in the #23 impressed with his demeanour and approach against the benchmark driver of his generation.

He took the pressure and absorbed the punches in his side, in the end doing enough to convince his not-easy-to-please bosses that he was good for at least another year in their car.

Albon continued, “Everyone knows Max is quick and who he is. What better way to learn and to prepare myself than to have a teammate who’s one of the fastest on the grid?

“It’s a good thing and a goal to chase. He has had a lot of years within the Team and knows how to extrapolate the best from it, for me, it’s still a learning process.”

“Working with Toro Rosso was great, I felt very well looked after and part of the team,. It was a big step for me to be called up to Aston Martin Red Bull Racing – there were big boots to fill and being new to the sport I wanted to make an impact and prove what I could do.

“There are things I need to work on for next season, but I’m starting to get a better understanding of where I need to improve.”

And improve he did, as he racked up eight top-six finishes in the nine races he had in the RB15.

The one that went missing was at the Brazilian Grand Prix, where looked set for his first podium until he was punted off by Lewis Hamilton, the Mercedes driver immediately owning up for the error and apologised to the rookie.

Looking back on Interlagos, Albon said, “When I look at the weekend as a whole, there are a lot more positives than negatives. Brazil, to some extent, was good. I am proud, but I want more.

“Afterwards, I was more disappointed for the team rather than myself. It would’ve been good to get those extra points. In the end, it was good for Max but it would’ve been good for everyone, and myself – I’m not going to lie – but it happens, it’s racing. I was over it by the next morning.”

After ticking all the boxes in his nine races for Red Bull, Albon says his task for 2020 is to raise his game, “The gap is shrinking and it’s looking positive for next year, we’ve got a good platform to work with, which is really important in terms of developing the car and we want to take the next step.

“It’s all going in the right direction, I want to mix it at the front next year!” he concluded.