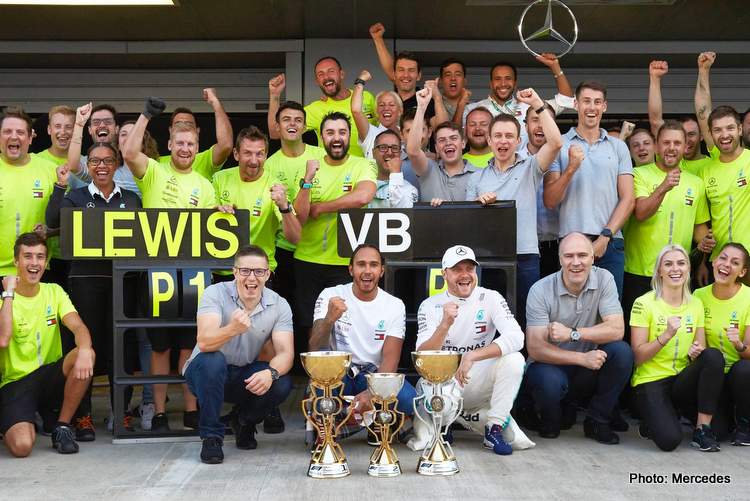 World Champions Mercedes savoured a ‘deliciously ironic’ win at the Russian Grand Prix on Sunday after Ferrari tried to engineer a one-two finish but ultimately shot themselves in the foot and handed victory to their fiercest rivals.

Charles Leclerc had started on pole position for the Italian team, who had looked set to celebrate a second successive one-two.

Instead, a virtual safety car triggered by Sebastian Vettel’s Ferrari breaking down on track helped Lewis Hamilton to maintain Mercedes’s 100% record of winning in Russia with his ninth victory of the season, ahead of Valtteri Bottas.

“We were fortunate in the way it played out,” said technical director James Allison a former Ferrari man. “It’s deliciously ironic in a way that it was Sebastian’s misfortune that brought us our fortune.”

The virtual safety car slowed Leclerc, who had already pitted, while giving Hamilton the time to take fresh tyres and stay in the lead.

Before that moment, Ferrari had been embroiled in controversy over a pre-race strategic agreement between their drivers, played out over the team radio, to make sure they got past Hamilton at the start.

Vettel, third on the grid and directly behind Leclerc with Hamilton to the right on the front row, slipstreamed the helpful Monegasque and led him into turn two.

The agreement, as Leclerc understood it, was for Vettel to then hand back the advantage. Vettel argued he would have got by Hamilton anyway and banged in a series of quick laps.

Clearly unhappy with the situation as the team tried to engineer the swap, Leclerc complained that he had ‘respected everything’.

The swap eventually happened during the pitstops but not before it had become a major talking point.

“I find it very strange that Sebastian had to give the place back, but it’s a decision they’ve made,” said 2009 world champion Jenson Button, in Russia as a pundit for Sky Sports television.

“I think they’ve over-thought it, personally, because it looks like he (Vettel) just got a great tow as normal there.”

Vettel would not comment on the details of the deal, “I spoke with Charles in particular before the race and I think it was quite clear. Maybe I missed something.”

“I was in third and Charles was in first and we were talking about a strategy to find a way past Lewis,” added the four-times world champion, who won the previous race in Singapore after strategy played into his hands. “Obviously I had a very good start so there were a couple of options on the table.”

Ferrari principal Mattia Binotto moved to defuse the tension on a difficult day for a team whose run of three wins in a row came to an end, “Charles would have given the slipstream at the start to Seb to make sure we would have been first and second at the first lap, as that would have put us in the best position to control and manage the race.”

“Ideally we would have swapped back. But Seb was very fast in the race so any decision could have been postponed. Anyway, he got such a good start that he overtook Hamilton even before Turn 1 so in his mind, which probably is right, it wasn’t Charles giving him the slipstream. He took simply the slipstream because he was in that position.”