Corinna Schumacher: I have Michael to thank for this 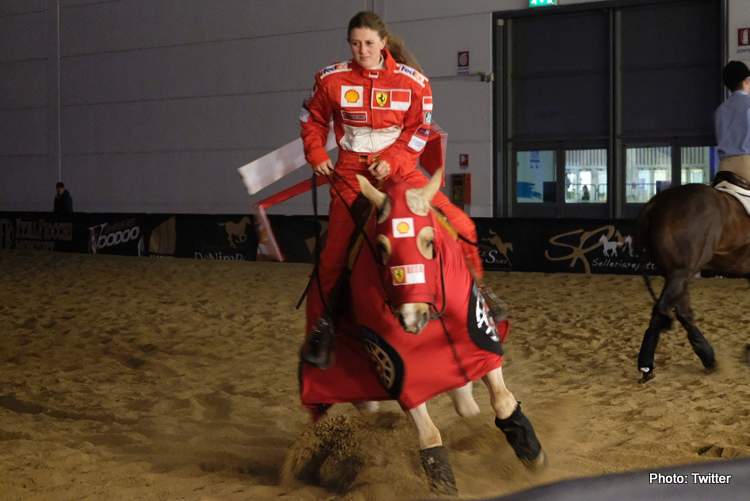 Michael Schumacher rose to greatness with Ferrari and the Formula 1 icon’s wife admits she has him to thank for the passion her family now has for horses.

Ferrari still runs thick through the veins of the Schumacher family. F1 legend Michael, whose condition has been shrouded in secrecy ever since suffering severe head injuries in a skiing accident in 2013, enjoyed the best years of his life with the Italian team and his daughter Gina has also embraced the Prancing Horse — literally.

The horseriding champion kitted herself and her trusty steed out completely in Ferrari gear as she took part in a freestyle competition in Verona, Italy, overnight.

Gina stole the limelight as her F1-themed routine included several pit stops and tyre changes along the way.

Gina’s perfect tribute comes shortly after her mother — Schumacher’s wife Corinna — gave her first interview since the tragic accident that rocked the family six years ago.

Corinna told Mercedes’ She Magazine her husband predicted Gina would become a champion horserider, which would never have happened had he not bought a Swiss ranch for their 10th wedding anniversary in 2005, where she keeps 40 horses.

“I don’t forget who I have to thank for this. That would be my husband Michael,” Corinna said. “When my husband told me that one day Gina would be much better than me, I was not thrilled. ‘What do you mean by that? I work with horses from morning to night, trying to learn everything’.”

Gina is a successful rider and won a gold medal with the German team this year in the Reining European Championships in Switzerland. The 22-year-old also spoke to She Magazine, saying Michael taught her what it would take to become a champion.

“When you drive a car, you can stick it in the garage afterwards. But a horse needs to be looked after all the time, even on Sundays,” Gina recalled her father telling her.

The Schumachers are set to appear in a documentary about the F1 icon later this year. The film was made to mark Schumacher’s 50th birthday and the 25th anniversary of his first world title victory.