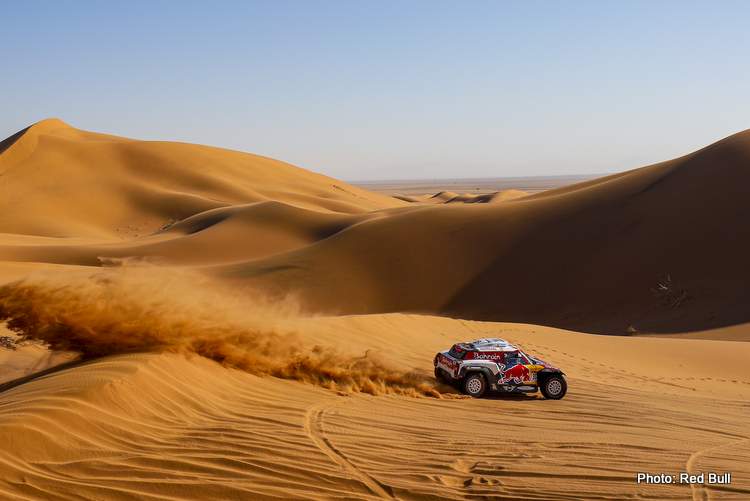 Dakar 2020 is developing into an absolute epic — not only did Mini star Stephane Peterhansel’s Mini buggy beat Toyota’s Nasser Al Attiyah to a sensational Day 9 win by all of 15 seconds, but Al Attiyah closed to just 24 seconds behind Carlos Sainz Sr.’s second Mini buggy at the top of the overall standings after nine days of racing.

It took a little time for the cars to settle down but once they did it was a straight dice between Frenchman Peterhansel and Qatari Attiyah with the two never more than a minute apart.

The drama came when Spain’s overall leader Sainz lost time early on and again near the end to allow his Toyota rival and Mini teammate to close right up in the general standings as Sainz scrambled home in fifth, six and a half minutes behind his teammate Attiyah, and the Minis of home hero Yasir Seaidan and Pole Jakub Przygonski, to allow Al Attiyah to slice the overall gap down to just 24 seconds.

The Hiluxes of Saudi Yazeed Al Rajhi and SA Gazoo trio Bernhard Ten Brinke, Giniel de Villiers and Fernando Alonso were next up, with Frenchman Mattieu Serradori who won on Monday, struggling to 22nd in the Johannesburg-built Century-Corvette.

The 477km special to Haradh saw Quintanilla, Aussie Price, Spain’s Barreda and Californian Brabec trading places early on in the bike race before the Chilean made off to win, while Botswana star Branch made a late charge to fifth and yet again be the only privateer in the top ten. That leaves Brabec 20 minutes clear of Quintanilla, Price and Barreda overall with Branch 25th.

It was a USA 1-2-3 in the side by sides where Blade Hildebrand beat Mitch Guthrie and Casey Currie home with Zimbabwean Conrad Rautenbach seventh as he consolidated his fourth place overall behind Currie, Chilean Lopez Contardo and Russian Sergei Kariakin.

The Dakar may be nine days in, but it is by no means a trot to the finish. There remain a good few stings in the tail yet — Wednesday’s monster 534km race to Shubaytah is not only an epic on its own, but it is also the first day of the cars’ marathon stage.

Your daily Dakar report is brought to you by Motorsport Media courtesy of TreasuryOne Motorsport and Red-Lined Motoring Adventures.