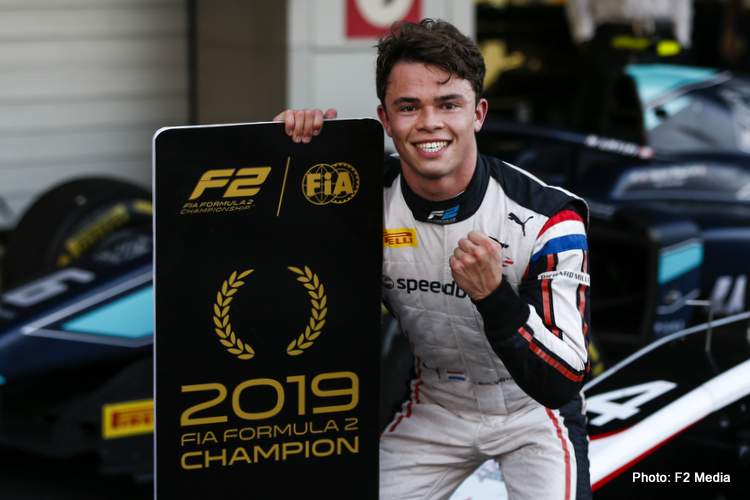 Newly crowned Formula 2 champion Nyck de Vries is not writing off his chances of racing in Formula 1 after the 24-year-old Dutchman wrapped up the title at Sochi, having raced in the category since 2017.

But he is not stepping up to Formula 1 next year. Instead, Mercedes has signed him up for the new works Formula E team.

“The current Formula 1 market is completely blocked,” de Vries told Algemeen Dagblad newspaper. “There is no realistic chance for me there.

“Of course I dreamt of Formula 1 as a little boy, but that dream didn’t take me all the way there. Still, I am the F2 champion and not many people can say that.”

Some believe de Vries’ 2019 achievement is not spectacular, given the level of talent in the field this year and the fact that it is his third season in F2.

“People will always have their opinion, but I don’t think I need to be ashamed of this title,” he insisted. Look at my career next to Albon’s. He didn’t become champion here or even runner-up.”

“Lewis, Leclerc and Max are the very best. All three of them stand out. But the rest, I grew up with them. Sometimes one of them won, the next time the other. Take Lando Norris, who won one race in Formula 2 last year compared to my three.”

Still, de Vries is not ruling out launching into F1 at a later date, “Nothing is impossible. I think Mercedes will supply engines to several teams in the future. But that’s looking too far ahead. I am grateful for the opportunity I have now and who knows what the future holds.”

Also at Sochi, Russian Robert Shwartzman wrapped up the Formula 3 title. He is strongly backed by Ferrari and has been linked with a role at Alfa Romeo.

“I have not personally communicated with anyone from Formula 1, that’s for my managers,” he told Izvestia news agency. “Alfa Romeo? I don’t know anything about that.”

Winner takes it all pic.twitter.com/AS6xg0baZ1