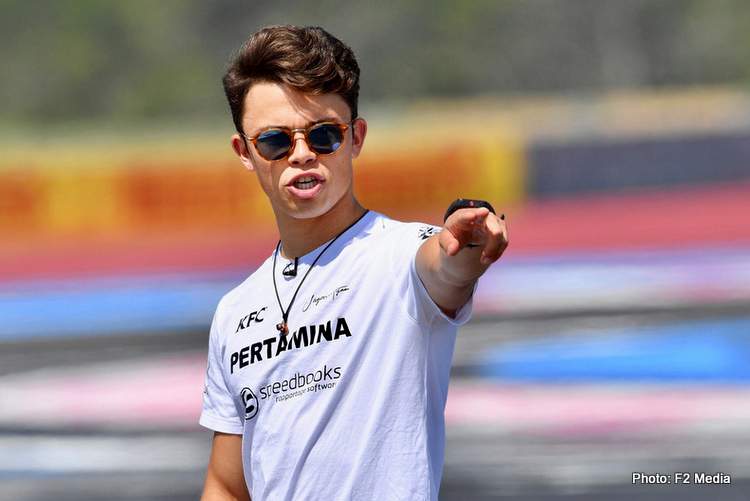 In the wake of clinching the 2019 Formula 2 Champion title, Nyck de Vries gave a candidly honest account of his season in the feeder series, his disappointments and his successes in his rise to the top.

After fumbling his first F2 shot last year, the young Dutchman made amends by winning the title with the season finale still to run. Typically he would slide into an F1 seat – and he has done enough to warrant it, but right now this won’t be happening for him. Instead, he will begin the next chapter of his career in Formula E with Mercedes.

Nyck de Vries, 2019 FIA Formula 2 champion – how does that sound?
NdV: Pretty cool. In my in-lap, I still wasn’t sure and just before crossing the line I asked which position are we actually in. I kind of knew we were leading but I was 100% convinced, so they said ‘you’re in P1 mate’. I was happy with the race win but then we were kind of uncertain whether it was really done or not. They told me ‘wait until you get to the pit lane and then you’ll see’. Just looking at the board in front of me when I arrived, that was pretty cool. There were some goosebumps there.

We saw some celebrations from you in the pit lane. Just what does this title mean to you?
NdV: Almost like revenge. Obviously last year I was in a position to fight for the championship, which was a very tough championship with everyone who has now been promoted to Formula 1. I really blame myself for missing out on the real battle because I simply made too many mistakes at the start of the season in positions or situations where we were able to score big points. Then you’re on the back foot from the beginning. I can see that difference the same way in our opponents this season. As soon as we started to grab the lead and have a little advantage, you could tell that they were sometimes making mistakes which were not necessary because they had the feeling that they had to try and catch up. I think we were in the position, although we were under pressure and we had to deliver, we were in control. As a kid, you dream about Formula 1, and the route towards Formula 1, and I’ve had a very bumpy ride with a very successful karting period and difficult time in cars, and things changing. I only just managed to stay in single-seaters and it felt like a second chance in Formula 2 because I blew my first last year. I was very thankful for the opportunity, especially to do it with ART because we had some unfinished business together from GP3, which was a very difficult season. Not in terms of pace, but it just didn’t come together. They might look a little bit cold from the outside at times versus some other teams with a lot more emotion, but honestly, it’s a true family. When I joined it really felt like coming back to a family and I felt, from day one, very much supported and we worked as a family. It certainly didn’t come from out of the sky. We really worked hard for it. With everything that’s happened through the past years it all came together and I’m very pleased that I was able to have done this. Obviously I chose a different route and direction in my career, but I’m very pleased with that opportunity and at the same time I’m very thankful that at least I’ve been able to tick this box and no one will ever be able to take this away from me.

You mentioned the team there… Racing for the same team that George Russell won the title with last year, and with your experience as a driver, you were one of the favourites from the start this season. Did that add some pressure to the situation as well?
NdV: I think there were 100 reasons behind why we were one of the favourites, and why we could add extra pressure to ourselves, but I gain enough experience. Despite that, I think the team also did a really good job in supporting me and last year we were a little too focused on winning, specifically, and not gathering points. To be honest I knew that I wasn’t like that if that makes sense. I made mistakes that were just not ‘me’. I’m happy that I’ve been able to prove this year the opposite. The team certainly had a big role to play in it. For example in Monza. It’s hard to say but in Spa, we were in a good position to make a good step towards the championship but with everything that happened, it didn’t happen, which was the right decision. Then in Monza, we qualified in front, and we didn’t do much wrong, but we got disqualified and you begin to see your gap in the championship shrink. The season was still very long and it was obvious that very shortly after Monza my future would be announced. I’m happy that now, and in the upcoming months, I can switch my focus to my new chapter together with Mercedes and make sure I’m best prepared for that because there’s not much of a winter break for me this season [laughs].

You’re referencing the more recent races, but actually, if you look back to the start of the season your least successful weekend was the opening weekend in Bahrain. Were you expecting more from the get-go this season?
NdV: No. We always knew that Bahrain was always going to be a very difficult race for me personally because of the nature of the track, but perhaps also our package. We get so little testing that it was quite unrepresentative because of weather conditions. It was extremely cold and you face different problems that you do during the season. You get such little time together to learn what you need from each other, and Bahrain was always going to be a difficult one. I wouldn’t call it a wake-up call, but it made us extra sharp for the remaining part of the season. I think in Baku we might have deserved a little bit more in the Feature Race, but I still felt that I was quite conservative, especially in the Sprint Race. You’re in that position of trying to close a gap rather than extending and managing a gap. At that stage, I just wanted to collect the points and the main approach was that we had to take the points which were available to us on the day. If we had a package to win then we had to do that, and if we couldn’t, even if it was a P7, we had to bring it home. That was very important for the championship campaign. Recently I think when you gather that kind of momentum and confidence throughout the season then you have weekends like Monza. Of course, we had luck, but that’s when you can be a bit more aggressive and show that we can race as well when it’s necessary. I think it was very important to adapt to all the circumstances and situations in order to extract the maximum all the time. I’m just very proud and happy for the team and myself together. I know they really had faith in me and I didn’t let them down.

You mentioned building momentum there, but was there ever one point in the season where you thought ‘this is my title for the taking’?
NdV: Of course I believed that we had all the ingredients there to become champion, but so many things can happen that are out of your control and can make it more difficult. Monza could have turned out to be a bit of a disaster and then things might have looked a lot different. Maybe you have a technical problem or a mistake from my side in the Feature Race and then all of a sudden everything can turn around. We never got ahead of ourselves and we always stayed focused on the job. We’ve accomplished our goal and target together.

Something that Nicholas Latifi has said is about how close it is from second place backwards. Did you ever feel that there was one stand out rival you had this year or were you looking at a group of drivers?
NdV: That was almost an advantage. We were consistent and they were taking points off each other. I never looked at it that way but after one race one of my friends, who were all very much involved and supportive, made that comment. I thought it made quite a lot of sense but we just stayed focused on our job. At the end of the day, our desire to win was greater than all the rest of the world, and that’s why I’m so happy with not only today’s result but also yesterday’s qualifying. Now I feel like I can move on.

You’ve mentioned looking ahead to your future moves and where your career is going but is there going to be any specific race weekend from this season that is going to stand out for you?
NdV: Many. Obviously Monaco was amazing because it’s Monaco. I think the resilience we showed in Monza as a team was very strong. Silverstone was a very strong weekend because we were really struggling but we still brought home a podium on the Sunday. That’s what kind of made the difference to us in the end. We were there when we were, and if we weren’t we still kept it together, didn’t make mistakes, and took points and podiums.

You’ve won the title with three races still to go, more than one round to spare, how much does it relieve the pressure to get it done at the first opportunity?
NdV: To be honest, I was expecting to feel a little bit more, I don’t know, excitement, but maybe it’s more relief at the moment and it has to all sink in. That said, it almost feels like delivering the expectations and doing what we had to do. I was still confident if the championship didn’t happen here that we could do it in Abu Dhabi, but just because of everything that’s coming up I’ve no time to celebrate it. Monday morning I have commitments straight away, the evening will be interviews and filming. Tuesday I have one day to get my stuff together and then I’m leaving for Fuji. When I come back from Fuji I won’t even be coming home. I’ll have to ask my sister to bring new luggage and go to Germany for Mercedes. From there I go to England for Suzuka race support I think for MGP. From there I go straight to Valencia because I thought it wasn’t worth doing two extra flights for one day. I’ve a week there… then I lose track. Basically, until Bahrain’s WEC event it’s like this. I’ve been told the F2 prize giving is on the 11th, but there’s a WEC race on Saturday… Don’t worry I’ll be there! I will! I’ve already asked someone to come with me!