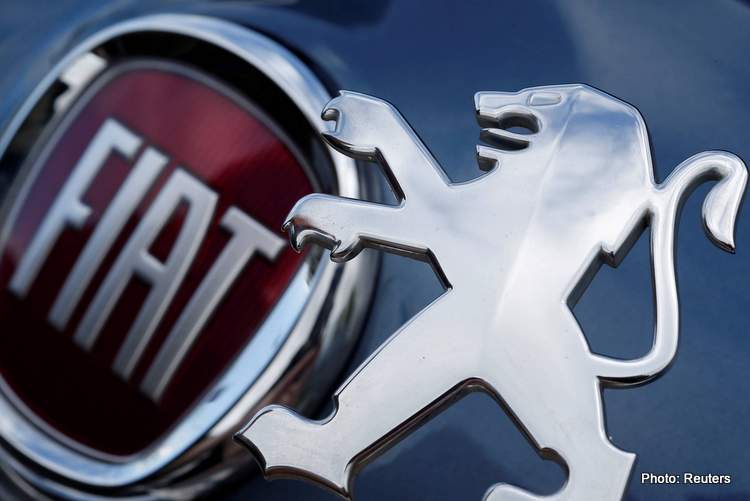 Fiat Chrysler and Peugeot maker PSA face the challenge of winning over regulators and delivering on a pledge to slash costs without closing factories after sealing a binding deal to create the world’s fourth-biggest carmaker.

Both tasks are likely to prove difficult, as two of the industry’s oldest dynasties try to combine major European operations under the gaze of politicians and trade unions who have vowed to resist any move to cut jobs.

Success is vital to help both companies cope with a slowdown in demand and the cost of making cleaner vehicles to meet tougher emissions regulations.

In a sign of the pressures on the wider industry, Sweden’s Volvo AB agreed on Wednesday to sell its Japan-based UD Trucks business to Isuzu Motors and share technology to help cut costs.

France’s PSA (PEUP.PA) and Italian-American Fiat Chrysler Automobiles (FCA) (FCHA.MI) announced a preliminary deal six weeks ago for an all-share merger that would create a company worth about $50 billion and unite brands such as Fiat, Jeep, Dodge, Ram and Maserati with the likes of Peugeot, Opel and DS.

The terms were little changed in the binding deal announced on Wednesday, including a target to cut costs by 3.7 billion euros ($4.1 billion) a year without closing factories.

However, analysts said the effective premium being paid by PSA to achieve the 50-50 split was slightly lower.

They have yet to say precisely how they plan to tackle that potential excess, and which car platforms – or underlying vehicle structures – they will focus on, only detailing that most production would be concentrated on two platforms.

“The merged group will have to make massive savings and probably also close plants, even if the CEOs’ choice of words is different,” he said, adding large investment would be needed as both PSA and FCA are “currently lagging far behind the competition in terms of technology and product range.”

In the short term, the combined group will use profits from selling Ram pickup trucks and Jeep SUVs to U.S. drivers to fund the development of cleaner vehicles to sell in Europe and China.

The finance ministers of both France and Italy welcomed the deal, but also said they would closely monitor any impact on jobs in their respective countries.

FCA said it would meet unions on Friday to discuss the deal.

PSA Chief Executive Carlos Tavares, who will be CEO of the merged group, said the two companies were already very competitive in terms of labor costs versus turnover.

The companies expect to make about 40% of savings from product-related expenses, 40% from purchasing and 20% from other areas, such as marketing, IT and logistics, they said in a statement. 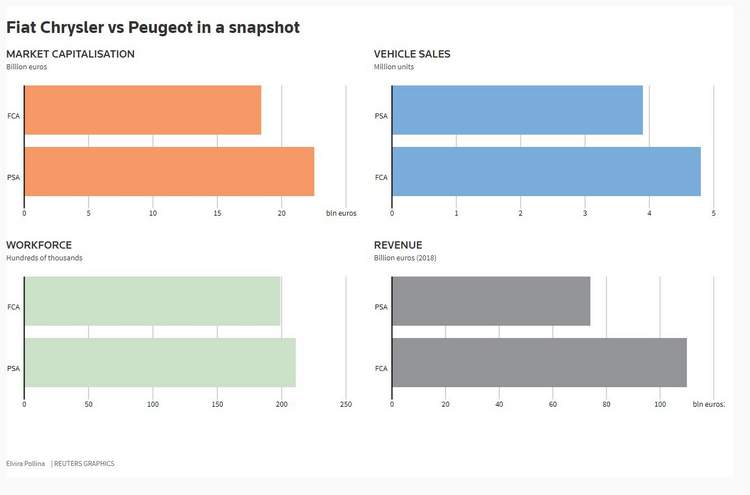 PSA and FCA expect the deal to close in the next 12 to 15 months and said they would come up with a name over the coming months. In the meantime, they will have to win over regulators in the United States and Europe.

“This is obviously a huge consolidation of the sector that will surely require a considerable effort in securing competition (approval) across a variety of jurisdictions and especially the European Union,” said Jonathan Branton, head of competition at global legal business DWF.

LMC Automotive say PSA and FCA were the third and sixth-largest carmakers in Europe last year by sales volumes, and combined would have just pipped Volkswagen to the top spot.

In a move that could help smooth U.S. approval, China’s Dongfeng Motor Group (0489.HK) will trim its 12.2% stake in PSA by selling 30.7 million shares to the French firm.

That stake is worth around 680 million euros and will leave Dongfeng holding around 4.5% of the merged group.

“We have reviewed this topic extensively with the teams from both sides and we are very comfortable that we have no problem on anti-trust,” Tavares told a conference call.

The merger brings together the Peugeot family, which built its first vehicle around 130 years ago and still holds a stake in PSA, and Fiat’s Agnelli clan, whose scion John Elkann will chair the combined group

There will be an 11-strong board, with five members nominated by PSA and five by FCA, including labor representatives from both. Tavares, whose initial five-year term as CEO will begin once the deal has closed and gained all approvals, will have the additional seat.

The companies did not clarify what would happen when Tavares leaves. Two sources close to PSA told Reuters last week that French stakeholders were seeking reassurances they would retain a numerical advantage on the board.

Following are key details of the deal: