Hamilton: Charles should have moved to defend 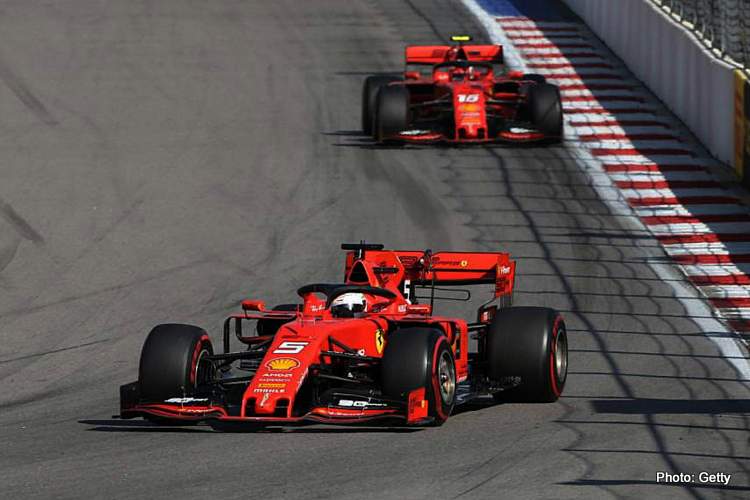 Formula 1 World Champion Lewis Hamilton has weighed in on the feud between Ferrari drivers Sebastian Vettel and Charles Leclerc, admitting he would have acted like the German driver did during the Russian Grand Prix.

On that afternoon, Vettel zoomed into the lead thanks to a slipstream from his teammate who ceded the lead observing an agreement that would see him given back the position, but the driver of the #5 car had other plans.

Ultimately the swap happened during the pitstops, but the radio noise launched a myriad of headlines, Italian media trumpeting the outbreak of war between the two drivers in red.

Asked about the matter ahead of the Japanese Grand Prix at Suzuka, Hamilton said, “It’s an interesting dynamic they have there because obviously Seb was number one and now clearly not. From the energy, the outlook, they’re trying to ramp Charles up to be.”

The question of number one driver is always a sensitive point within teams, Hamilton’s Mercedes team have more than once favoured their star driver at the expense of teammate Valtteri Bottas.

Asked by Sky F1 if such a scenario is healthy, the Briton mused, “Is that good for a team? I don’t think so. But that is the philosophy they’ve had for forever.”

But the five-time F1 World Champion relates, “I think Charles said ‘I’ll let you take the tow’ and then didn’t move to defend, which he should have done. You don’t give up a place and expect to get that back. I wouldn’t give it back.”

Asked if he sympathised with Vettel’s plight in the world’s most famous team, Vettel said, “I don’t know what Seb’s feeling… I’ve not had a team back the other side so much, so heavily, before.”

Famously, Hamilton was the new kid on the block when he stepped to McLaren for his debut, the promising young Formula 2 champion versus double F1 World Champion Fernando Alonso.

“When I was with Fernando, obviously he was number one but then mid-season they changed that to make it to equal. Then that dynamic shifted,” recalled Hamilton.