F1’s managing director of motorsport Ross Brawn says that Lewis Hamilton has more than earned all six world championships that he’s won since starting his F1 career at McLaren back in 2007.

“Lewis has deserved it, he has deserved every championship he has won,” Brawn told The Guardian newspaper this week.

“It is not like Lewis is winning out of luck,” he added. “He is winning because he is doing a fantastic job, and you have to give him credit.”

Hamilton heads into the new season aiming to clinch a seventh crown to equal the all-time achievement of Michael Schumacher, who earned five of those championships between 2000 and 2004 at Ferrari where Brawn was technical director.

The pair resumed their professional relationship when Schumacher came out of retirement to race for Mercedes when Brawn was team principal there. Schumacher was eventually succeeded at Brackley by Hamilton in 2013.

That puts Brawn in a unique position to compare and contrast the two modern motor racing giants – although he’s the first to admit that it’s an impossible question.

“They were different cars, different eras, different competition,” he insisted. Even so, in some ways he felt that Hamilton and Schumacher were surprisingly alike.

“They are both massively talented in what they do in the car and those moments where they pull something out of nowhere,” he explained.

“Some of the qualifying laps Lewis has done have left the team speechless. Michael was the same. There are sometimes just those drivers who can do that.

“Lewis is incredibly professional, dedicated and committed,” he added. “But Michael had an intensity of detail toward the car that Lewis doesn’t need.

“Michael came up in an era where there wasn’t the technology there is now. Data analysis was pretty crude. Now a driver gets out of the car and the engineer has an analysis of the car’s behaviour through every corner. 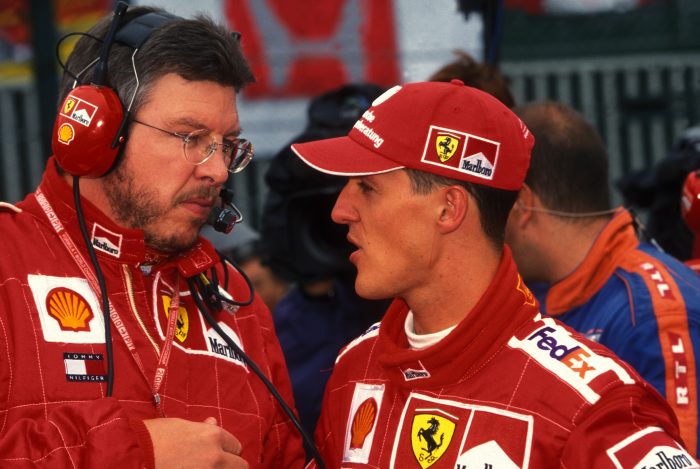 “When I first worked with Michael we had a sheet with the corner numbers on and he had to explain where he had understeer or oversteer, and then we would then analyse that!”

It’s no surprise that Brawn prefers the old days. Ever since moving into the management level of the sport, he’s been trying to find ways of revising the rules and technical regulations to restore the same level of on-track close competition he recalls from former campaigns.

“These cars at the moment are terrible aerodynamically when they get close to each other,” he stated.

“They have a plethora of bits that fall off as soon as they look at each other. That’s not a racing car.

“You don’t want a tank, but you do want something which is robust enough to race properly. And we have lost that.”

And Brawn is convinced that the difficulty in getting all ten teams to agree on implementing every change with the FIA and the sport’s commercial rights holders Liberty has been one of the stumbling blocks to getting F1 back pointing in the right direction.

“We are moving away from this unanimity which has always blocked anything happening,” he said. “It has been counterproductive.

“We are moving away from the rigid, locked situation where things can’t change even when they are wrong.

“Developing F1 is not just technical or sporting regulations, it’s financial regulations and the governance,” he added.