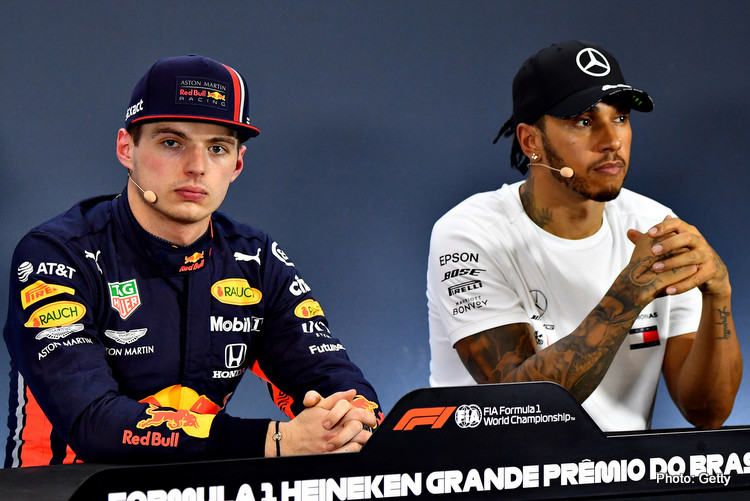 Lewis Hamilton has offered a stinging rebuke to Red Bull driver Max Verstappen, branding the Dutchman’s recent comments as a “sign of weakness”.

Asked about his rival’s “good but not god” remark at the launch of Mercedes’ 2020 car, the W11, Hamilton did not hold back in his assessment.

“I find it funny seeing that,” he said. “I’ve just always known to just do my talking on the track. Often I tend to see that as a sign of weakness.”

The driver many see as the heir presumptive to Hamilton’s Formula 1 throne, Verstappen was able to lock horns with the Briton on several occasions last year, even if he was ultimately powerless to stop him from winning a sixth driver’s world championship.

Driving a Red Bull car that for the past four years has been unable to match the performance of its title-winning efforts from 2010-13, Verstappen has been vocal in his belief that Mercedes’ cars have played an out-sized role in their pilot’s success.

For his part, Hamilton remains focused on capturing title number seven, a notion he reiterated on Friday.

“This is my eighth year at the team and the buzz is the same every year. Everyone couldn’t be more excited, enthusiastic, or driven.

“I would say the most impressive thing is that because we’ve had the success, it would be quite easy for them to be laid back today.

“Everyone is super focused, there’s been so much work that’s been done in the background to make sure that today runs smoothly and I think everyone is excited at this stage, refreshed, revamped and ready for the challenge that is ahead.”