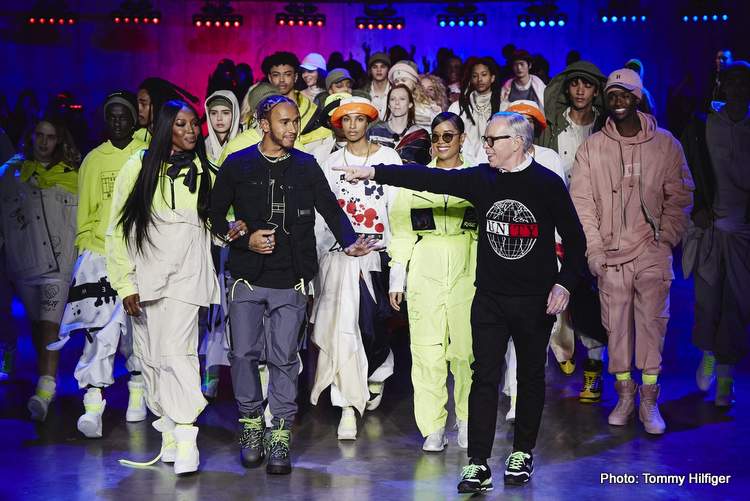 Hilfiger took over London’s Tate Modern, the former riverside power station that is now a contemporary gallery, to present the street style-inspired collection of unisex designs plus his more formal Hilfiger clothes for men and women.

The show, which featured supermodels Naomi Campbell, Erin O’Connor and Jodie Kidd, as well as models of diverse shapes and sizes, and accompanied by a live band that rapped, sang and played a steelpan, was underpinned by environmental sustainability, said Hilfiger.

“As a company, it’s a priority for us to become sustainable, so we’re working very, very hard every single day to become more and more sustainable,” the designer said in an interview before the show.

Also speaking ahead of the show, Hamilton said he hoped other luxury brands would follow Hilfiger’s lead and improve their sustainability profile.

“In the fashion industry, I think there’s a lot of work that can be done with all these brands. I want us to kind of, create a ripple effect,” Hamilton told Reuters.

Hilfiger’s collaboration with Hamilton is in its fourth season. Hilfiger said teaming up with Grammy Award-winning U.S. R&B artist H.E.R. for the latest collection helped them push boundaries. Among the creations were oversized items emblazoned with the words “unity” and “loyalty”.

As for his Spring 2020 collection for men and women, Hilfiger described it as mixing a rock vibe with East Coast prep. Navy and white designs featured fragments of the U.S. flag, alongside oversize duffel bags and quirky jewelry.

Some of those #TOMMYNOW magic moments!

at #TommyxLewis Season 4. Thanks to @thomasjhilfiger, all my amazing models and to everyone at @tommyhilfiger. It’s been a journey to create our most sustainable collection, but it’s something i’m so proud that we’ve been able to achieve. Feeling very grateful