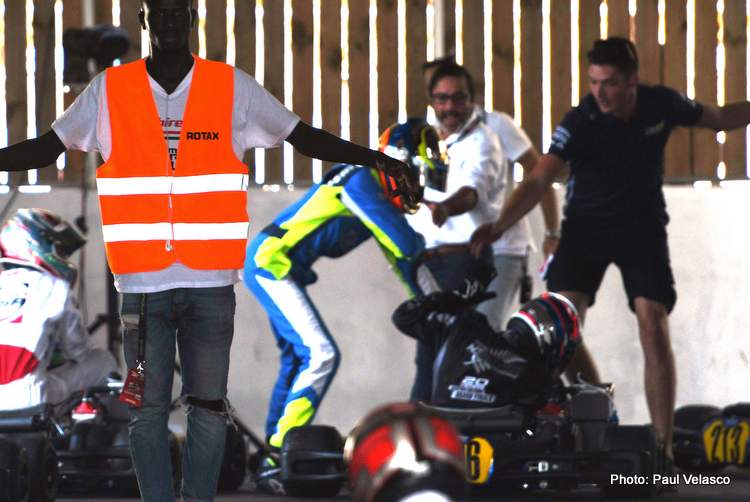 A week ago I had the good fortune and privilege to handle media for Team UAE at the recent Rotax MAX 2019 Grand Finals in Naples from 20 to 26 October, where a small but disturbing saga took place.

In among a week of non-stop stories, when 360 karters from over 60 countries descended on the Sarno, Italy for the 20th edition of the Rotax MAX Grand Finals, I tell the tale of young Oli Pylka and his hot-headed moment after a tight battle for the Junior MAX (under-16s) title Grand Finals Saturday.

Team Poland’s Pylka,  who was a hot favourite for the Junior MAX title, was starting from the front row for the final ahead of a strong and close field in which half a second covered the top 12 drivers and another half a second the rest the of the 36 drivers in the field.

From the start, Pylka took an early lead and set the pace.  He was chased by the pack as they swapped positions on the slipstream friendly main straight and jousted through the tight and tricky corners of a venue, that has hosted the likes of Michael Schumacher, Lewis Hamilton, Nico Rosberg when they were karting in during their respective junior careers.

From the moment the flag dropped a game of cat and mouse developed at the front and it was riveting stuff with several drivers going for it in the way that karting at this level allows.

Team New Zealand’s Clay Osborne was in among the posse chasing Pylka and on lap 12 of the tense 17 lap race, the race the Kiwi who was duelling with his Polish rival emerged the better as they rubbed and raced at the front in a group of half a dozen or so.

When the dust had settled it was Pylka who was the loser as the incident compromised his and him dropped down the order to 12th position with Osborne taking the well-deserved title for driving a gutsy and smart race.

When the race ended Pylka, who eventually crossed the line 11th, sprang out of his kart and sprinted under the media terrace into the weigh-bridge parc ferme area where the winner had parked his kart. It was clear that Pylka was not going to congratulate Osborne.

As Osborne sat there soaking in the reality of being champion, Pylka unleashed a couple of blows at the bewildered winner and had it not been for the timely actions of Pylka’s shocked mechanic who separatied his charge from the new champion things might have been a lot worse.

Pylka only managed to land a punch to the helmet of Osborne (as the photo I took (above) of the incident shows) but the damage was done and thus the young Pole was DQ-ed from the event.

Since then it became clear that there are parallels to a year ago in Brazil when Max also launched a similar (if not as physical) attack on Esteban Ocon and although no punch was landed that day, the intent was clearly there.

But this incident certainly raises the issue of being a responsible role model and not lowering the bar of sportsmanship in our sport and that there is some truth in what Jacques Villeneuve had to say of the Dutchman’s antics in Mexico: “I think he’s a bad role model.”

Thus whether he likes it or not, Max’s status in the sport as a highly visible driver on the F1 grid, means he must realise that his actions, like attacking a rival or pompously ignoring yellow flags, have far greater consequences than he imagines.

For aspiring young drivers who idolize  Max Verstappen could it not be a subliminal trigger?  If Max can do it, why can’t I?