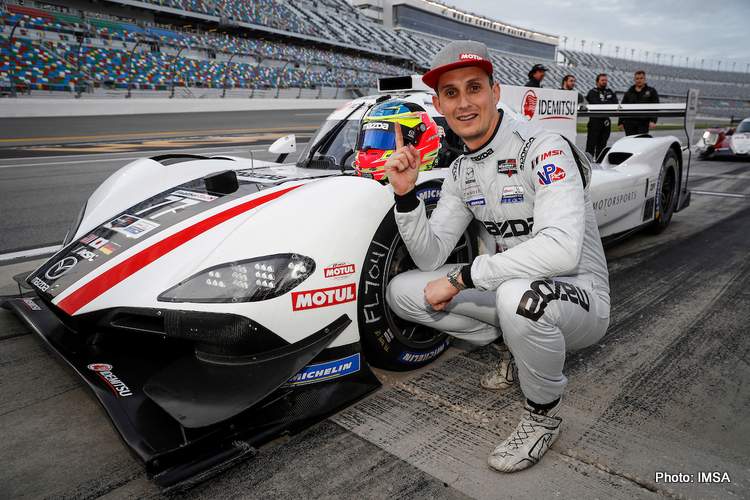 Mazda Team Joest won the pole for the Rolex 24 at Daytona in a session shortened when Ricky Taylor crashed his Team Penske in Thursday qualifying.

Oliver Jarvis piloted the Mazda DPi to the top starting spot in the twice-round-the-clock endurance race that begins Saturday at Daytona International Speedway and uses both the road course and the oval.

He was being challenged by reigning IMSA series champion Juan Pablo Montoya in an Acura for Team Penske, but Montoya’s shot at catching him ended when Taylor crashed with a little less than two minutes remaining in qualifying.

Wayne Taylor Racing, the defending race winners, qualified fifth with Ryan Briscoe behind the wheel. The team has a new look this year as full-time driver Jordan Taylor left his father’s organization to become a Corvette factory driver, so only Renger Van der Zande and Kamui Kobayashi returned to the winning endurance lineup.

Briscoe has replaced Jordan Taylor as the full-time driver for the season, while five-time IndyCar champion Scott Dixon completes the endurance team lineup.

The field for this year’s race has just 38 entries — the smallest field in 58 runnings of the prestigious season kickoff. The smallest field previously was 42 starters in 1962, the second year of the race.

While the field does include an impressive 18 different manufacturers, there’s a glaring absence with Chip Ganassi sidelined after Ford ended its program after four seasons in the GT Le Mans class. Ganassi hopes to return to sports competition in 2021, potentially in the Daytona Prototype class, but his two sidelined entries have contributed to the low car count.

Keating is competing in two classes this weekend as he’s also a member of Riley Motorsports in the GT Daytona class.

Porsche GT Team swept the first two qualifying positions in the GT Le Mans class as Nick Tandy won the pole in the 911 RSR-19, and Laurens Vanthoor was second in the sister car. Tandy broke his class qualifying record from last year.

Tandy has now won four poles at the Rolex, tying Scott Pruett for the race record.

Pfaff Motorsports won the pole with a Porsche 911 in the GT Daytona class, which has the most entrants with 18 cars. Among the cars in GTD are two Lexus entries from AIM Vasser Sullivan, one of which is being piloted by reigning NASCAR champion Kyle Busch.

But that car required a precautionary engine change after Thursday practice and was not ready to qualify. It will start at the back of the field on Saturday.

The Pfaff team, meanwhile, has turned heads all month with the debut of new firesuits that give a nod to the team’s Canadian roots. The firesuits are styled to resemble a plaid flannel shirt and denim pants, but made from the standard fireproof Nomex material.

The new car will be called the Le Mans Daytona and be eligible for teams to compete for both the FIA World Endurance Championship (WEC) and the IMSA overall title.

The convergence gives automotive manufacturers the opportunity to compete with the same car at Le Mans, the Rolex 24, at SuperSebring or at Spa-Francorchamps, at the Motul Petit Le Mans and even Silverstone. From September 2021 in the FIA WEC and from January 2022 in the WeatherTech Championship, manufacturers will be able to enter the top category and compete in the two leading championships in endurance racing with the new model LMDh.

France noted the agreement is yet another indicator of the work various motorsports series are doing to strengthen the sport, “I don’t think we ever really worked against each other, but there’s definitely, from the motorsports standpoint, the way things are changing.

“We’re all working together to make sure we keep motorsports in a good healthy spot. Nothing’s easy, and that’s not easy, either,” he explained.