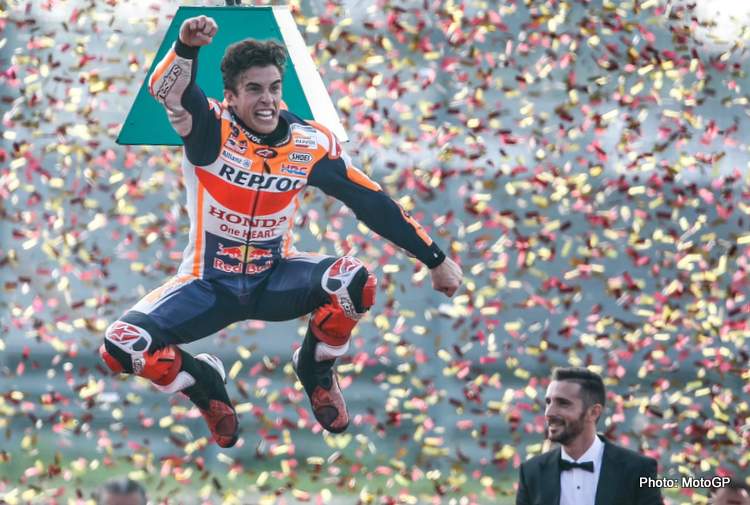 Honda rider Marc Marquez sealed his sixth MotoGP title with four races to spare after winning the Thai Grand Prix for the second year in a row on Sunday in a thrilling duel with French rookie Fabio Quartararo.

The Spaniard had to score two points more than Italian Ducati rival Andrea Dovizioso, who finished a distant fourth at Buriram’s Chang International Circuit, to wrap up his fourth championship in a row.

The title was the eighth of 26-year-old Marquez’s grand prix career, and he becomes the youngest rider ever to win so many. He was 125cc (now Moto3) world champion in 2010 and Moto2 winner in 2012.

Marquez, who passed Petronas Yamaha’s Quartararo on the last lap after a wheel to wheel duel between the two rivals in sweltering heat, now has an unsurpassable 325 points to Dovizioso’s 215.

The Spaniard, who had a huge crash in Friday practice that sent him to hospital for checks and then fell again in qualifying, did not put a wheel wrong as he reined in pole-sitter Quartararo and denied the 20-year-old a first win. The pair were just 0.171 of a second apart at the line.

“I was planning the weekend to try to win the race, it doesn’t matter about the championship or the distance between me and Dovi,” grinned Marquez after celebrating with his teammates and fan club. The target was trying to find the best way to win the race and it’s what I did.

“Fabio was really fast in one part of the race, there was a gap in the middle but I caught up…amazing year, all the Repsol Honda team did an amazing job.”

The title made Marquez the youngest six-times champion in the top class, taking that honour from Italian great Giacomo Agostini who did it at 29 years old.

The previous youngest eight times champion was the late British rider Mike ‘The Bike’ Hailwood, who reached that milestone at 27.

The Spaniard has now won nine races this season, including the last three in a row, with 14 podium appearances.

In the race, Quartararo led from the lights while Marquez, who qualified third, almost collided with the Frenchman’s teammate Franco Morbidelli before slotting into second.

The rookie and the champion then traded fastest laps in a race that became another thrilling duel between the pair, with Marquez stalking the Yamaha, probing for a way past.

He made the move on the last lap but Quartararo fought back and rather than settle for second the Spaniard cut back in front again to take the chequered flag.

Quartararo, the only rider truly taking the battle to Marquez, was pleased with his first Thai GP, “I can’t be more happy; fighting to the last corner, I tried everything. If I didn’t try this move in the last corner, I don’t go home (happy)”.