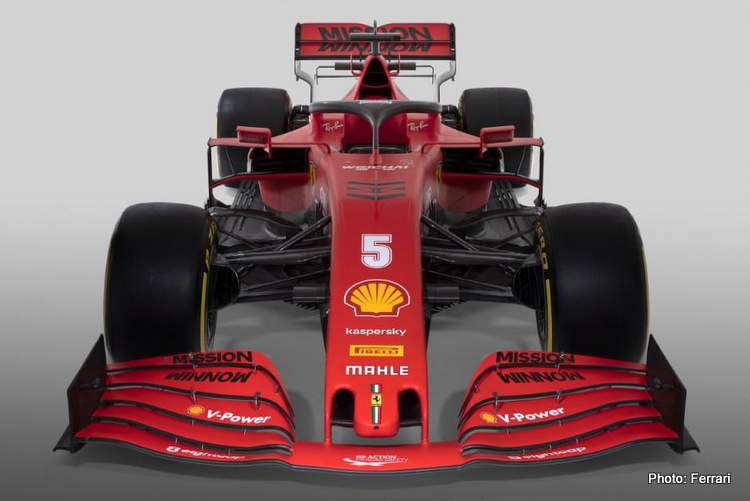 Dubbed SF1000 in honour of Ferrari’s thousandth Formula 1 Grand Prix due in Canada in June, the deeper essence of Maranello’s newcomer’s technical spec remains guarded, but from what we can see in the flesh, the basic launch car presented in Reggio Emilia suggests an evolutionary, rather than a revolutionary step for the Scuderia’s final stab at the current basic F1 rule set.

If anything, SF1000 does not appear to represent a significant step away from last year’s SF90. Of course, there is always the cloak and dagger around what Ferrari allowed to be shown in Reggia versus how it is expected the car will evolve through the coming two F1 test weeks and into the Aussie GP race weekend — teams never show all their cards, especially in a display as public as that launch, but there is a significant level of detailing that does catch the eye.

The new Ferrari retains its broader nose versus the 2019 Mercedes needle that McLaren has followed with its new car and it is clear that a lot of work has gone into crafting the SF1000’s suspension arms and rods to contribute to the greater goals of the entire car’s airflow management needs. The launch car’s five-element front wing is quite splendid and intricate in its detail, while a short venturi below the nose and between the wings, prepares underbody airflow for a shark’s gill-like multi-vane winglet that concentrates the draught in toward the centre of the underbody.

SF1000 has a number of busy, varied and intricate aero devices directing airflow to, around and particularly below the side pods in what seems a measure to further work the car’s much anticipated and considerable rake. The car gains flow-diverting wing mirror mounts above its smooth red upper side pods that bulge downward to meet a flat-sided black lower surface that waists radically inward and upward toward the rear below the tapering red upper bulge.

It seems the idea is to eke the most out of the dramatic waisting over a broad variety of side surfaces, in conjunction with the separate effect of the significantly raked floor under the car.

While its main foils appear quite simple, the rest of the rear wing is more complex, especially in its endplates, which both develop the waisted theme, but now also sprout a petticoat-like flat downward fence that continues straight down as the S-shaped structural aspect of the plate waists inward.

Team boss Mattia Binotto explains that great effort went into the packaging and detailing to deliver a slimmer car that will not be compromised in its set-up, whatever the circumstances and challenges of the circuit it is racing on.

Binotto reiterated that the team not only focussed on optimising SF1000’s aero performance through the better packaging of all components to achieve its slimline goals but that it has also worked hard to ensure the this year’s unit produces more power and weighs less while meeting this year’s new F1 oil consumption limits.

We will, of course, follow how SF1000 develops as the pre-season progresses, but while some were expecting a significant leap, the all-new Ferrari rather appears to be more of a sensible step forward that uses the sum of myriad smaller measures to perfect what was already a formidable package in some applications, to deliver that mesmerising pace at every racetrack.

With that in place, it remains to be seen how Ferrari handles its often questionable race strategy in 2020, not to mention its fighting cocks in the pits. Bring it on…