Race of the Decade: Opinions Divided 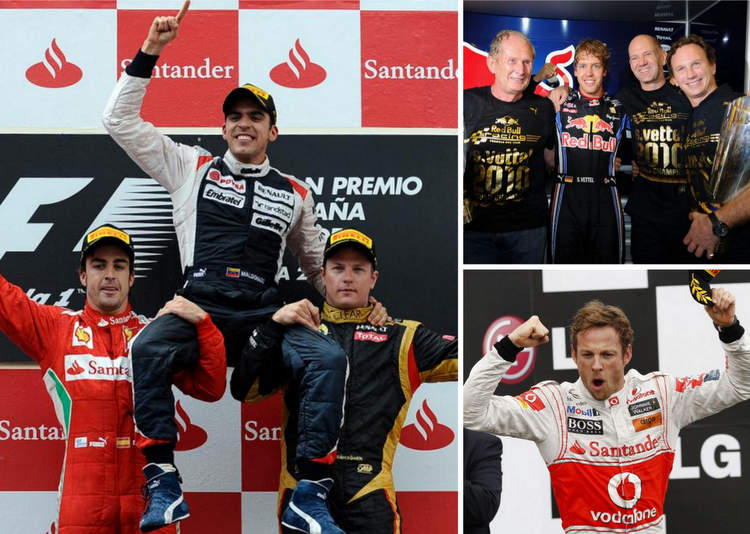 There were 2020 Grands Prix run during the past decade, and while for avid Formula 1 fans races tend to be epics, some do stand out as being highly entertaining and action-packed too, thus getting consensus from our crew was not going to happen.

Here are three memorable races of the past ten years:

I’ve learned that when it comes to sport, you should never say never, but I still feel confident in saying we will never have another race like the 2011 Canadian Grand Prix — and not just because we literally can’t have a four-hour race anymore.

Jenson Button going from last to first by passing Sebastian Vettel on the final lap– having been through the pits six times — was a drive unlike any we’d seen in the history of the sport, and probably the single best advertisement possible for the drama and intrigue that F1 can possess.

The podium photo says it all: Pastor Maldonado hoisted high in the shoulders of Formula 1 greats Fernando Alonso and Kimi Raikkonen after the Williams driver claimed a famous victory in Barcelona.

He raced hard, did his overtaking on track in what turned out to be his finest hour, a victory out of the blue – not inherited and fought for – by a driver from a minnow team. How F1 could do with that injected into a script which only allows three teams to win.

I never joined the Maldonado bashing camp but understood the ridicule scorned upon him. In the end, despite his foibles, on his day Maldonado was as quick as it gets. I would venture to say he was no more ‘dangerous’ than journeyman Romain Grosjean.

Notably in the corner of those celebration pictures is none other than a pre-Mercedes Toto Wolff. Was that the day he decided he wanted to win more?

As for the Venezuelan who made 95 F1 starts, his name will always be etched among only 108 drivers who won a Grand Prix. I am a sucker for Rocky-style real-life stories and Pastor-Does-Barcelona was one of those.

To me there were two really thrilling races that stood right out in the past ten years and both involved the same two men, among others. The latter first — Brazil’s 2012 finale, when Alonso had to beat Vettel to steal the title.

Vettel spun on the opening lap, damaging his Red Bull and dropping back to 22nd, but the out of position Vettel soon fought back to fifth behind Alonso in a rain-dogged, although Vettel struggled increasingly as the track dried, dropping back to sixth.

Then leader Hamilton’s Hulkenberg-assisted exit, a strategic Ferrari stop to see Alonso clear teammate Massa for second and a poor stop for Vettel to drop him to sixth, meant Alonso was ahead in the title chase. Vettel however found a way past Michael Schumacher to clinch his second title on the trot, the second he stole from Alonso in those three years.

That Jenson Button won, was merely academic, as was a Ferrari threat complaining of Vettel passing under yellow…

It was, however, the other title decider between Vettel and Alonso, two years prior to that, that takes my Race of the Decade nod. Ferrari man Alonso led the four-way title race into that finale from Red Bull duo Webber and Vettel, with McLaren’s Lewis Hamilton also in mathematical chance. All Alonso had to do was end up fourth if Vettel won. Vettel did all he could, leading from pole and leaving it to fate to sort the rest out.

And sort it out, fate it clearly did — with a little help from a Russian roadblock in the form of Vitaly Petrov and his Renault…