Alfa Romeo’s Kimi Raikkonen enjoyed the double honour of topping the timesheet on Day 2 of pre-season testing and bringing out the first red flag of the week when the Finn was left stranded out on the Circuit de Catalunya.

Raikkonen set his fastest lap with 40 minutes left on the clock and with the help of a set of Pirelli’s softest tyres.

But with less than 17 minutes left to go, the Finn’s Alfa was seen stranded near Turn 9, an event that brought a premature end to the F1 veteran’s day. 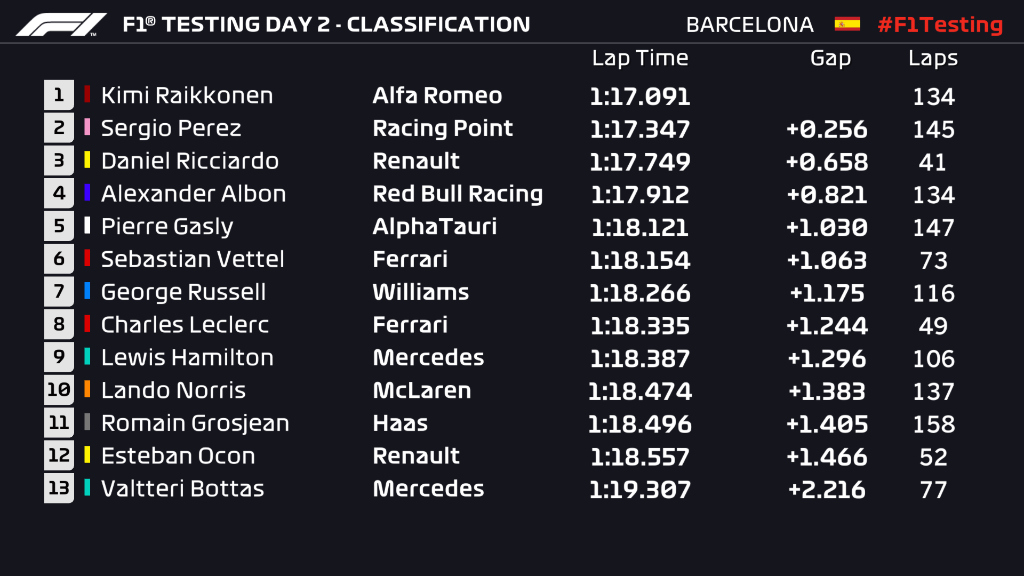 Like yesterday, Thursday’s session unfolded with few troubles but the afternoon saw a gremlin creep into the Mercedes garage where Valttero Bottas’ afternoon was curtailed by an ERS (Energy Recovery System) issue.

Still the Silver Arrows camp accumulated a productive 183 laps on the day, with Hamilton’s morning session accounting for 106 rounds.

Romain Grosjean’s day was also cut short when the Haas driver, who put in a massive 158 laps, spun with less than an hour to go and suffered a light contact with the barriers. Overall the Frenchman was left 11th in the day’s ranking. 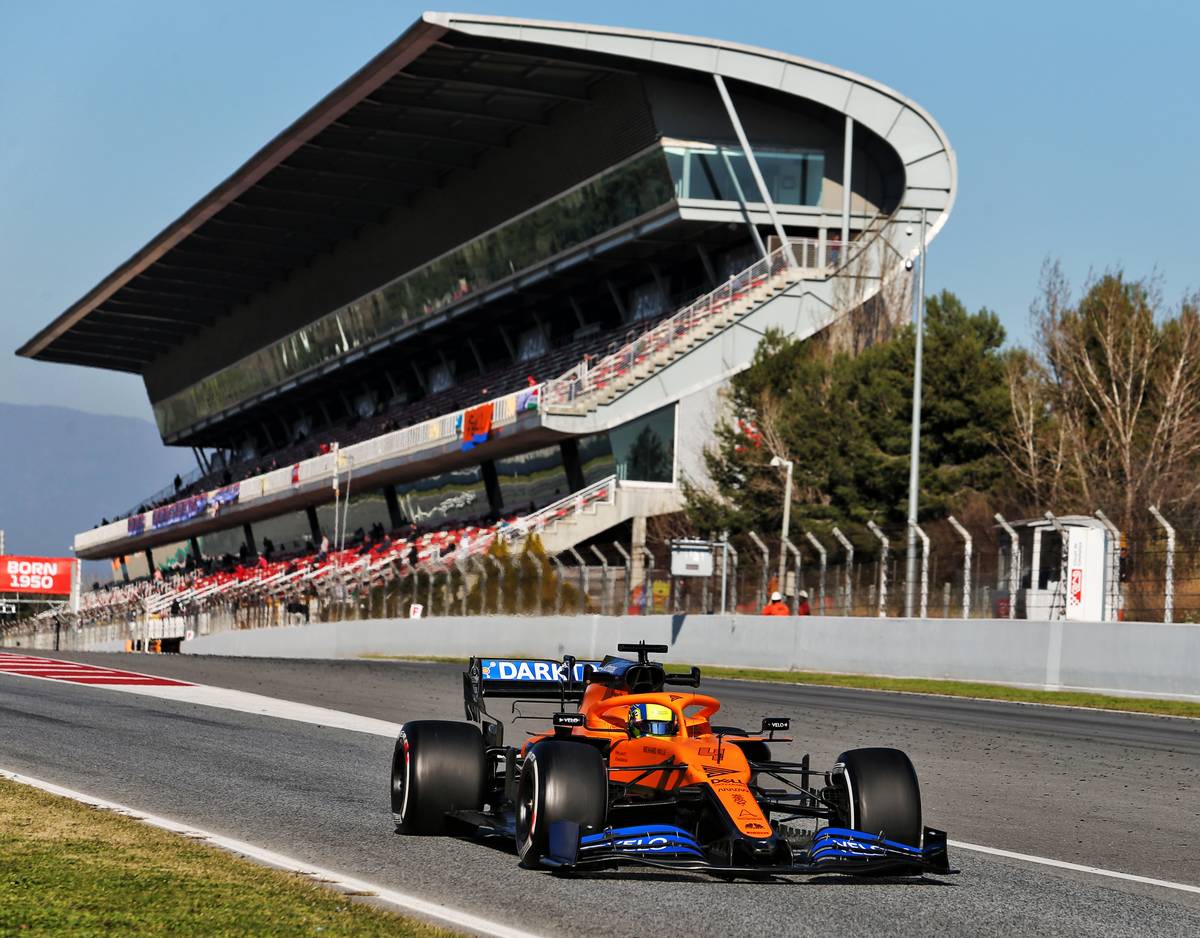 Sebastian Vettel took over from Charles Leclerc to continue Ferrari’s routine programmes, the German driver ending the day P6 with 73 laps under his belt.

McLaren’s Lando Norris was number two behind Grosjean in terms of overall mileage, the Briton putting 137 laps under his belt, with his best lap placing him 10th fastest.

Esteban Ocon followed Ricciardo at Renault and ended his day 12th fastest, 1.466s adrift from Raikkonen  but just ahead of Bottas.

So far, Mercedes, Red Bull and McLaren lead the aggregated lap tally for the first two days of pre-season testing. 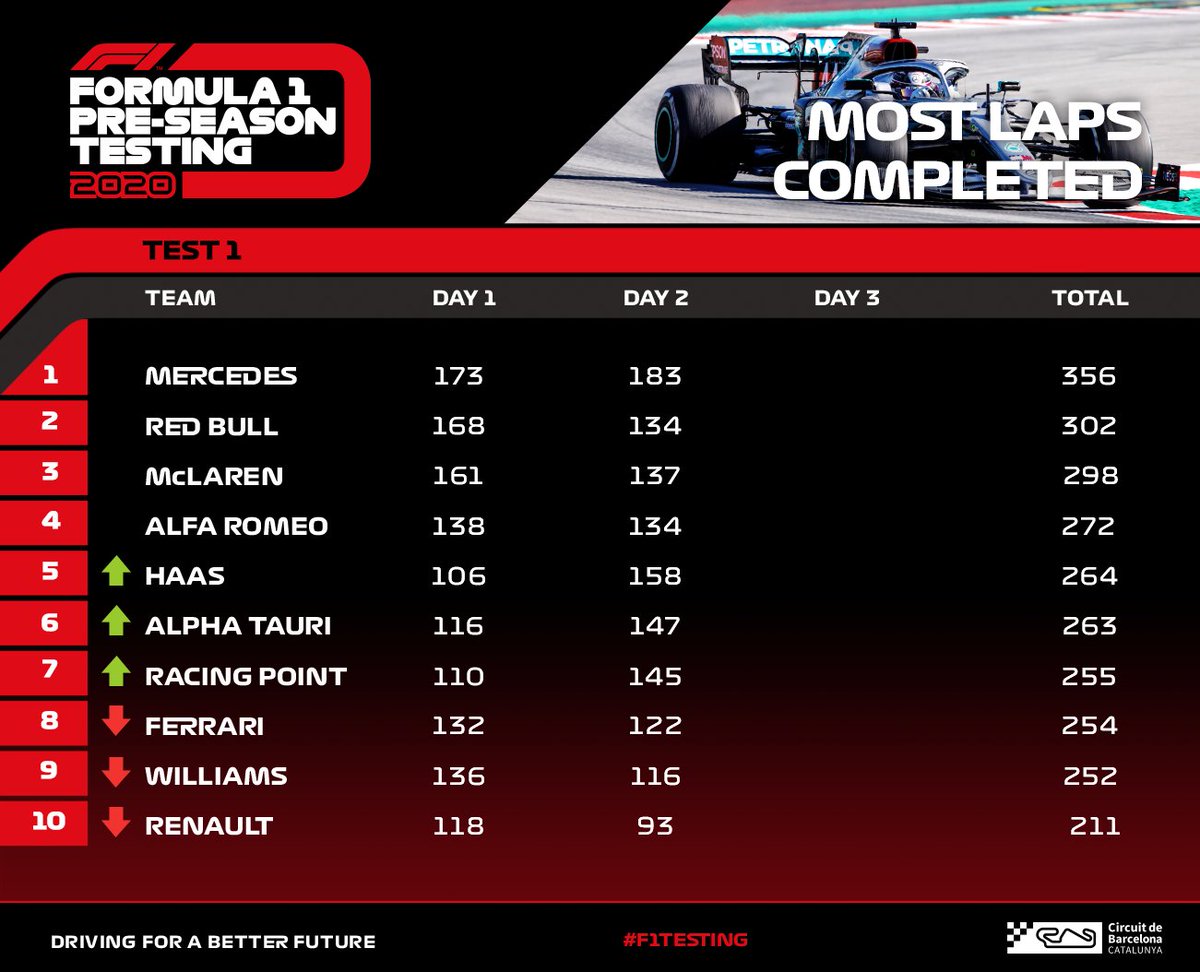 General reliability continued to be very good overall but the biggest story of the day was undoubtedly the revelation of Mercedes’ innovative DAS steering system on its W11.

Friday’s will mark the third and final day of the first week of pre-season testing at the Circuit de Catalunya, with the action kicking off at 9PM local time as usual.