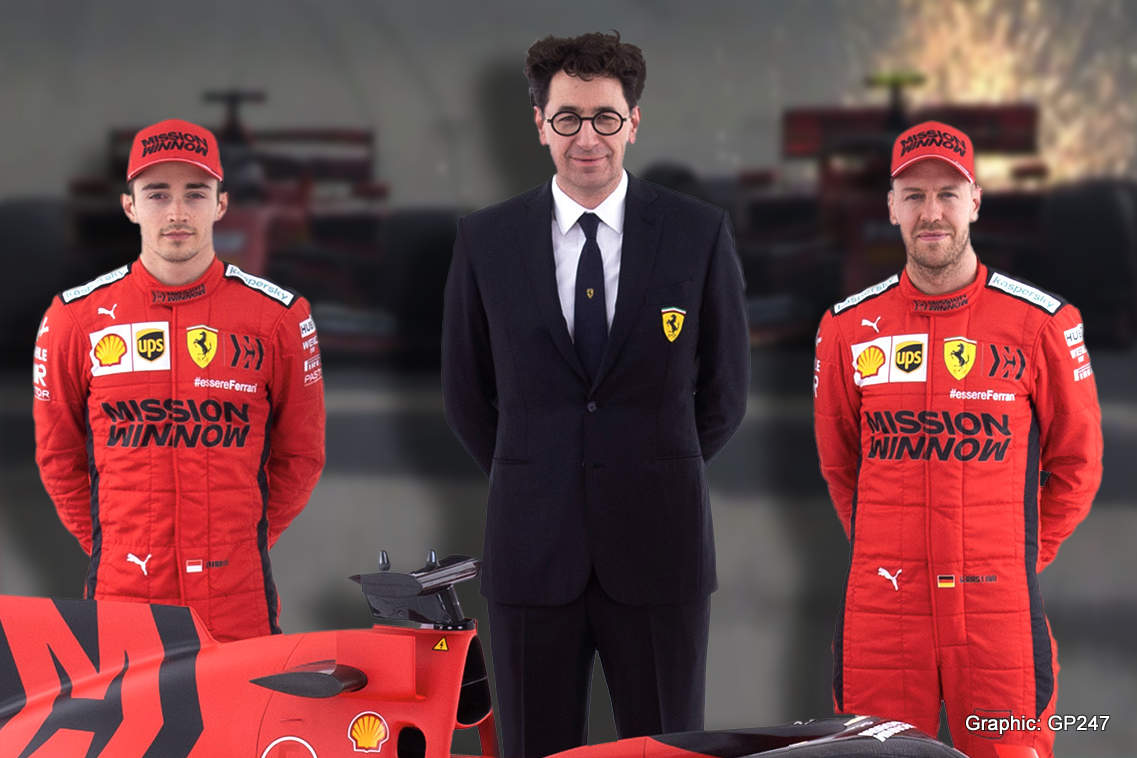 Ferrari team boss Mattia Binotto is talking up his troops ahead of Formula 1 pre-season testing starting in Barcelona tomorrow while remaining coy on prospects for the season ahead based on the youth of his team.

Speaking with presenter Fabio Fazio where he and driver Sebastian Vettel were guests on Italian television show Che Tempo Che Fa, while Charles Leclerc joined via satellite link from Monaco after his flight was canceled due to Storm Dennis, Binotto made no bones about his men.

“It is a fact that Leclerc and Vettel are the best driver combination on the grid,” Binotto pointed out: “I am convinced that they are the best couple in Formula 1 — Seb does not need any introduction and Charles is a boy born in our Ferrari Driver Academy nursery, from where we trust he will lead other young drivers into F1.”

Responding to recent Italian press hysteria around development issues prior to the launch of the team’s new SF1000, Binotto admitted, “It is wrong to predict performance — last year we started the F1 tests thinking we were very strong, but then we took a cold shower in Australia and we only recovered later in the season.

“People need to remember that we are still a young team and that we are trying to build, I think the team still has to grow and that there are lessons to be learned from the past. “The important thing is to grow — winning cycles take time to become successful and we must not forget that. “Formula 1 is also very competitive right now, I don’t think the competition has ever been so strong.”

Moving on, Binotto picked on Leclerc for his unauthorised and contentious parachute jump during the off-season. “I told you we have the best couple, but the even the best couple sometimes makes you sweat — that guy jumped in parachute,” Binotto explained gesticulating toward the screen showing Leclerc. “Have I forgiven him? “Actually no — he will never do that again — he has said as much and I hope he understands that!”

Vettel pointed out that he had parachuted before: “The only mistake Charles made was not to invite Mattia to jump with him!” the German joked. “I’ve parachuted before, before I joined Ferrari, so if it went wrong I wouldn’t have been there anyway and also because I know they’d get angry. “I went, I had fun, I just did it once.”

Parachutes are however Binotto’s last concern about his best couple right now — both real racers, lessons learned from the past have already very well proven that neither Vettel nor Leclerc will stand back in battle — even to the detriment of the team. So it remains to be seen if Ferrari can control its best couple on track in one of a few major tests facing Binotto and his young group of men in red through the season ahead…