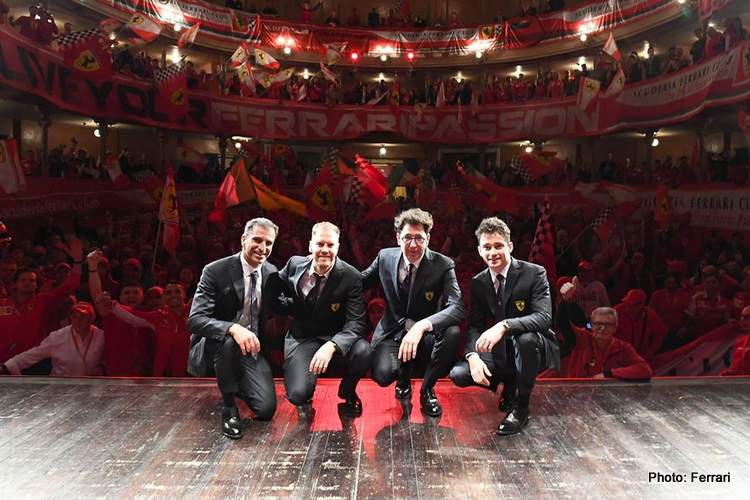 Will Maranello’s new challenger deliver its first driver’s title in 13 years, or is it all just a lot of hot air, all over again?

Ferrari and Formula 1. There cannot be a more dominant a brand in any sport, but the team that Italy and half of the world has pinned its hopes on every year for seventy has endured a bit of a dry patch on track of late. Make that more than a decade without a world championship.

That is something the team is desperate to turn around, so it could be expected that the a great proportion of the Tifosi, as the team’s massive, near lunatic fanbase is known, will be taking many of the promises around Tuesday’s launch of the Ferrari’s 2020 challenger with a pinch of salt.

First that new Ferrari — and it’s already quite controversial. SF1000 slipped into the international limelight at a lavish reveal at Reggio Emilia’s elaborate downtown Municipal Theatre where team suits and drivers Sebastian Vettel, and Charles Leclerc strutted their stuff as the latest car from the famed Maranello base not far away, rotated like a great red chicken in a vast rotisserie.

Just before that, Ferrari’s capo di tutti capi, boss Louis Camilleri promised: “We are all very aware of our great responsibility, but we are fully focused that great goal of victory. “We have the talent, we are determined and we plan to meet those objectives, whatever pressure we are under. “In fact we see the pressure as a positive challenge — it is that immense pressure that inspires us after.”

The team is already under immense pressure before the new car has even turned a wheel — race media has been reverberating with echoes of it being a failure in the wind tunnel. with the vitriolic Italian press at its damndest. Is there really a mole at Maranello leaking such sensitive information? Or is it juste the good old rumour mull in fits and starts as ever?

Whatever the grapevine says, Ferrari President John Elkann was adamant at Reggio, “We are proud to race for Italy and even though Ferrari has won 238 of the 991 Formula 1 races we have started to date, our lust for victory is stronger than ever.

“We, however, continue to face very tough opposition and that only spurs us on to do even better. We will keep on working as a team — that is after all that makes Ferrari’s Gestione Sportiva so different from the rest, both on and off the track — our team is our strength.”

The team, however, comes off a yet another painful season marred by infighting between its drivers, German four-time world champion Sebastian Vettel and his upstart Monegasque teammate Charles Leclerc. In fact, many observers are convinced that the team will have an even harder time managing the pair again this year. Vettel and Leclerc famously clashed and ruined any chance of challenging for third in last year’s driver’s championship at the penultimate race in Brazil while Red Bull Honda driver Max Verstappen trotted off to win the race to in essence secure third in the 2019 driver’s chase.

Ferrari’s sixtieth Formula 1 car, the all-new SF1000 will be the car Vettel and Leclerc will race in the team’s 1000th Grand Prix this season, most likely in Canada in June, and while the new car looks quite evolutionary versus last year’s SF90, the team promises it is all new.

“We have been extreme on the concept as much as we dared,” Ferrari race ream boss Mattia Binotto pointed out. “We have opted for maximum aero performance and maximum downforce l — the monocoque, the power unit and the gearbox have been packaged to achieve a slim body shape, all at a lighter weight and with more power too.”

Sounds positive. Vettel. Leclerc and the SF1000 join the rest of the 2020 Formula 1 hopefuls for the first of two three-day pre-season tests Circuit de Catalunya in Barcelona, starting coming Wednesday 19 February, after which the team packs up and heads for the season-opening Australian Grand Prix in Melbourne on 15 March. But with Italy and the world watching as Sebastian Vettel starts his sixth season for the team empty-handed alongside Leclerc entering his second year in the team, expectation is almost rabid.

Ferrari is the only team to have been part of the FIA Formula 1 World Championship from the very beginning and in the 70 years of the sport, its drivers have won 15 world championships, starting with the great Italian Alberto Ascari in 1952 and ’53, before Argentine legend Juan-Manual Fangio took the third of his five titles for Ferrari in 1956 and then Englishman Mike Hawthorn won the ’58 championship.

American Phil Hill next won the ’61 world championship for Ferrari and another Englishman, John Surtees won it in 1964. But after that Ferrari and the Tifosi had to wait eleven years until 1975, when Austrian Niki Lauda won it again. Lauda repeated the feat in ’77 and then South African Jody Scheckter was world champion in 1979.

But it took twenty-one years for Ferrari to win another world driver’s title after that when Michael Schumacher took the first of his five championships in a row from 2000. Since then, only Kimi Raikkonen was a Ferrari world champion in 2007.

It’s now been another twelve barren championship years for Ferrari drivers and eleven as a manufacturer, the second-longest gaps between titles in both championships in the team’s 70 years of racing Formula 1.

So yes, Mr Camillieri, the pressure definitely is on. And then some. Ferrari has once again let its fans down for far too long now and it is on your watch. It is high time for another Ferrari world champion, but can you deliver…?