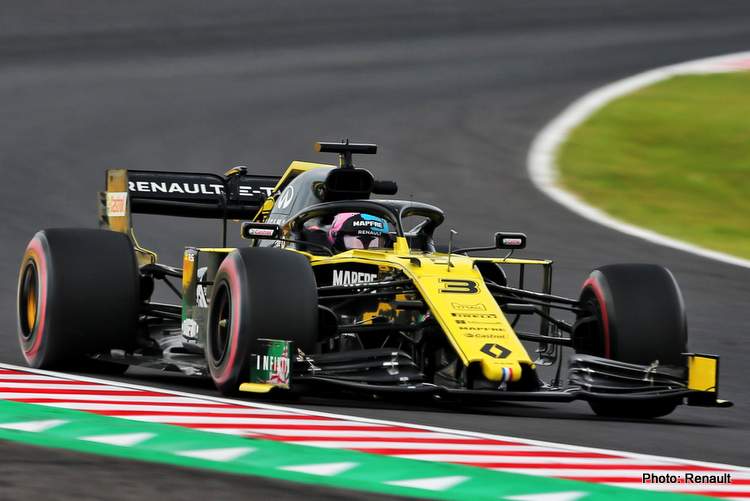 Renault F1 Team had a challenging day of practice at Suzuka Circuit as it adapted its preparations for this weekend’s Japanese Grand Prix.

With Saturday’s running cancelled due to the incoming Typhoon Hagibis, Friday’s programme was expanded to include race and qualifying simulations to gather as much information as possible on the current package.

Nico Hülkenberg finished the morning session in thirteenth with Daniel Ricciardo closely behind in fourteenth. In Free Practice 2, Daniel was seventeenth and Nico eighteenth.

“It was a tough Friday for us. We made some changes between sessions that seemed to help. We had some balance problems with a lack of grip, especially in Sector One, but worked through it to end the day happier. The times aren’t strictly representative as we ran out of sync with the others. It’s a day off tomorrow with the typhoon coming in but we will look at everything in detail and be ready to go straight away on Sunday.”

“We focused on getting in as much running as possible today knowing tomorrow is off. We improved the car in the afternoon after a difficult morning and found some decent progress. We decided to complete some long runs and then short runs towards the end of the afternoon. Unfortunately, both low fuel laps were compromised with traffic – we’re better than what the timesheets say – and I don’t think we’re too far off from where we want to be. Hopefully, we can have a good qualifying and then be in a better position to race on Sunday.”

Nick Chester, Chassis Technical Director: “Our pace on the long runs is actually looking pretty good, but we weren’t able to show our speed on the low fuel runs at the end of the session. We got stuck in traffic around others who were on long runs, so ended up monkeying around a little bit.

We ran the new front wing, which did improve the handling when we found the right balance and set-up. With the revised weekend schedule, we have to put it all together at the right moment, but leave some flexibility to adapt to whatever the weather throws at us.”

Cyril Abiteboul, Team Principal: “It was a good, common-sense decision to postpone qualifying until Sunday. With the predicted path of the typhoon, it would not be wise to have cars on track nor spectators in the grandstands. Cancelling qualifying well in advance allows us to plan correctly and take the appropriate action for team personnel and fans alike.”