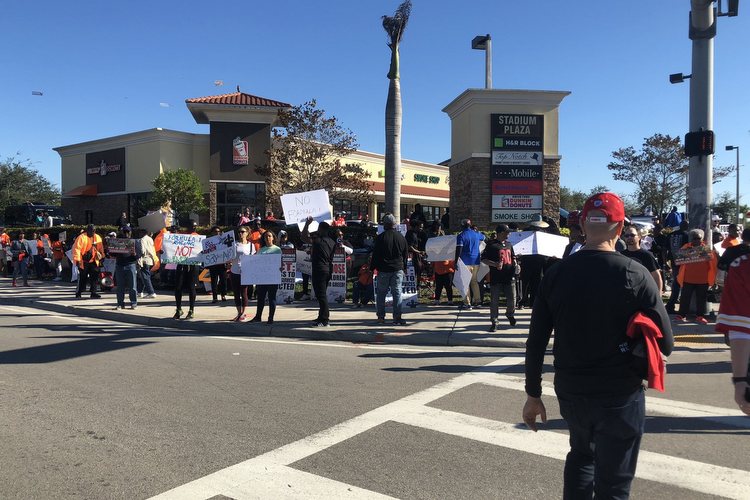 Super Bowl LIV between the Kansas City Chiefs and San Francisco 49ers may have been a great game of American football, but it wasn’t the only spectacle taking place at Miami’s Hard Rock Stadium on Sunday.

With plans moving forward for the host of the NFL championship game to also host a Formula 1 grand prix in 2021, local opposition used the opportunity to voice their disapproval outside the stadium, owned by the Miami Dolphins’ Steve Ross.

Unfortunately for them, they may have bit off more than they could chew — figuratively speaking, of course.

As reported by the Miami Herald, the residents found themselves competing for the attention of passersby with a group called the Blood Stained Men — a national nonprofit that lobbies for an end to circumcision.

Led by Miami-Dade County Comissioner Barbara Jordan, the anti-F1 protesters began to clash with the anti-circumcision group, whom Jordan accused of being planted by Ross and Miami-Dade Mayor Carlos Gimenez to disrupt their rally.

“Go tell Ross to pay you a little bit more,” said Jordan to one of the her rival protesters, who was wearing pants with a red stain on the crotch.

Soon after police arrived on the scene and dispersed both parties, despite Jordan arguing her group was doing as they did every Sunday, and deserved consideration before out-of-town competitors.

Presumably they will be back again next week, although it seems likely their pleas are in vain with the Miami GP getting ever-closer to an official confirmation.