Szafnauer: I predict a podium for both drivers 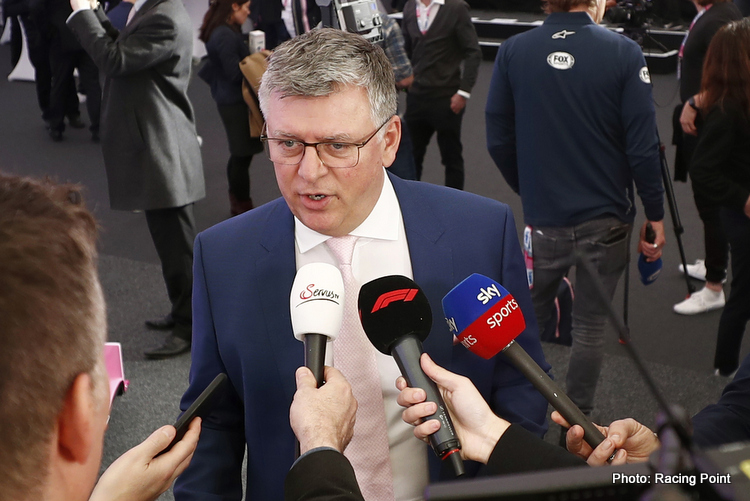 The Racing Point Formula One team will start the season with a water company as new title sponsor but podium champagne the target.

“I predict that before the race they will both be drinking water,” team principal Otmar Szafnauer said of drivers Lance Stroll and Sergio Perez at the launch of the new, and still very pink, RP20 car at water technology company BWT’s Austrian headquarters.

“And after the race this year both of them will be on the podium at least once drinking the champagne.”

BWT have pledged to donate a well in Gambia for every race at which the team scores a point. They scored in 14 of the 21 last season.

“We’ve got to get both drivers in the points at every race,” said Szafnauer.

Canadian Stroll, son of team owner Lawrence, and Mexican Perez make up an unchanged line-up — the latter starting his seventh year with the team — and both have experience of the podium.

McLaren’s Carlos Sainz and the Toro Rosso pair of Pierre Gasly and Daniil Kvyat all made the top three last season in a championship dominated by Mercedes, Ferrari and Red Bull.

In 2018, in Azerbaijan, Perez was the only driver from outside the top three teams to stand on the podium.

Racing Point will become the Aston Martin works team next year, when major rules changes also come into force, after Stroll senior agreed in January to buy up to 20% of the British sportscar maker.

“A long time ago in America somebody told me that you can’t get busier than a one-armed wallpaper hanger. So that’s what we felt like,” he said of pre-season preparations. “It was the busiest winter.”

Spares, he added, would be somewhat limited for the opener in Australia on March 15 but that was more a sign of development being pushed as late as possible rather than any problems.

“I’m confident with the work we’ve done over the winter on the new car and the work Mercedes has done on the powertrain… we’ll have a good chance to hit our targets for the Formula One team as well as the wells in Gambia,” said Szafnauer.