#TheXtraLap: How the VSC handed victory to Mercedes 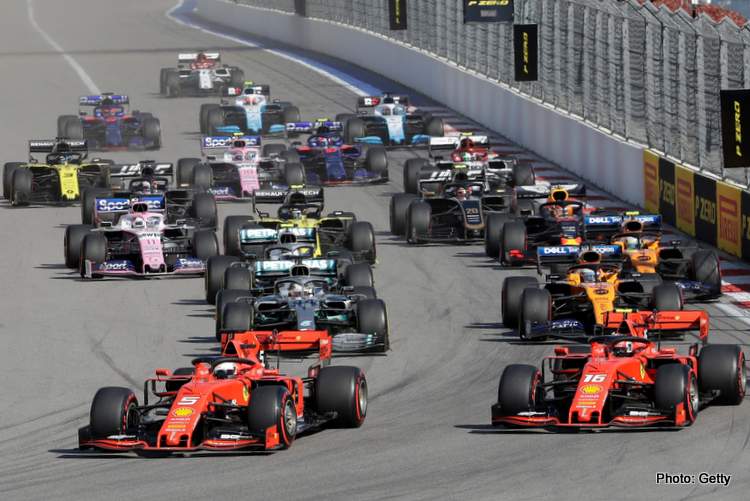 Before the Russian weekend got underway, it was already clear that both Red Bulls, both Toro Rosso’s and one Williams would get grid penalties.

From Friday onwards, it was Charles Leclerc that set the tone and throughout Saturday, the Ferrari driver remained top of the class.

The race got off to a great start with Sebastian Vettel taking over the lead from Leclerc while the German started in 3rd. Only Lewis Hamilton was able to hang-on within striking distance. Leclerc was very vocal again about the position he found himself in but the team urged him to keep his focus and all will get sorted out later in the race.

At one point, Leclerc pitted and found himself behind Hamilton and Valtteri Bottas and when Vettel pitted, the order was restored when Vettel came back on track behind Leclerc. What happened next changed it all. Vettel slowed down and the team told him to stop. After the race he told reporters that he had an issue with his battery.

The thing is, because of the fact Vettel had to stop, it caused a VSC (virtual safetycar) period which meant that both Mercedes drivers got a “free” pitstop and got back on track, still in front of Leclerc.

The driver that was so dominant all weekend, not only lost his teammate for constructors points but thanks to his teammate’s retirement, he lost the lead and had to try and overtake 2 Mercedes cars.

This turned out to be impossible and Hamilton took his 82nd win, including the fastest lap. Bottas came in 2nd, the 42nd podium of his career while Leclerc had to settle for 3rd place.

Did Ferrari lose it because of Vettel’s retirement?

In my opinion, it already went wrong after the start when Leclerc and his engineer was vocal regarding what happened and that it wasn’t according to plan. They were so busy trying to get the strategy working and giving Leclerc back the lead, that they didn’t see what else was possible. They should have just let them race.

Not to say the outcome would have been different, but I’m sure if Vettel could do his own race and instead of pushing, Leclerc could continue managing his tyres, they could have done with Leclerc what Mercedes did with Bottas and be a roadblock for Vettel.

Instead, they opted to give Leclerc back the position by using the pitstops. Leclerc was 0.4s off from a safe pitstop but while Leclerc’s pitstop was 2.5s, Vettel his pitstop lasted three seconds and there was the 0.4s and then some.

All went still to plan but then Vettel’s MGU-K failed and while Vettel was of the opinion that he had parked the car on a safe spot and could easily be backed into the escape road, a VSC made sure all cars couldn’t go faster than a certain delta time.

This meant both Hamilton and Bottas could pit while Leclerc, still a long way off, was driving much slower and so it happened that both Mercedes cars ended up in front of Leclerc.

Were Mercedes lucky to have won the race?

Starting on the medium tyres with both Ferrari drivers starting on the soft, it usually meant that Lewis Hamilton and Valtteri Bottas could go longer match the red cars with the speed they showed all weekend, I thought Hamilton would get second or third, with Bottas off the podium.

Sebastian Vettel’s retirement caused a VSC and by doing so gifted Mercedes a “free” pitstop so in that respect, yes, they were lucky. That said, Hamilton was the only one that could really keep up with Leclerc and Vettel so there could always have been a chance that Hamilton might win or came close to winning.

However, the unexpected happened and Hamilton found himself in the lead with Bottas in 2nd and that’s how it stayed till the end.

Did Red Bull get the most out of it?

Before the weekend started, all four Honda-powered teams would get grid penalties and so would Red Bull. Max Verstappen made the most of it during qualifying on Saturday but had to start from 9th. His teammate Alexander Albon made a huge and costly mistake during qualifying and crashed.

Due to the extensive damage, a lot had to be replaced and he had to start from the pitlane. A good start and a solid race from Verstappen meant he was in no-man’s land for most of the race and would end up 5th but because of Vettel’s retirement, he ended up 4th at the finish. His teammate Albon had an exciting and eventful race from pitlane as he overtook one car after the other and at the finishline, found himself in 5th position. In my opinion, both drivers got the most out of the race.

Although Sergio Perez did a strong race to finish 7th, my vote would go to McLaren’s Carlos Sainz and Lando Norris who finished in 6th and 8th. They had a solid race and stayed in front of the Renault team that only had Nico Hulkenberg left to fight.

“These 12 points are crucial in our ongoing battle to secure fourth position in the Constructors’ Championship.”

Any situation stood out during the race?

The moment when Vettel retired after a string of 25 race finishes, it was the pitstop of Hulkenberg that didn’t go as planned and cost him valuable time so he could have ended up higher than 10th.

P10 in a bloody race !
It didn’t really go our way today.. a poor start, a slow pit-stop and an unfortunate VSC timing.. Nevertheless, we scored points 4x in a row Suzuka next! #F1 #RussianGP

Who disappointed the most?

That is a tough one. Toro Rosso as they couldn’t make enough progress. Alfa Romeo for the same reason but then again, Pierre Gasly and Daniil Kvyat spend more time fighting each other, Kimi Raikkonen made a jumpstart and got a drive-through penalty that in effect destroyed his race and Antonio Giovinazzi just didn’t have the pace.

Daniel Ricciardo retired with extensive damage to his floor after his contact at lap 1 while Williams also didn’t make it as George Russell crashed out and Robert Kubica was called in to retire “to conserve parts ahead of the upcoming races”.

So to name one, I would go with Giovinazzi unless he also had an issue I didn’t know about, except the contact with Daniel Ricciardo and Romain Grosjean on lap one.

Antonio “It was not the kind of race I was hoping for but it is what it is. I got stuck in the middle between Ricciardo and Grosjean on lap one: We’ll need to check if there was any further damage as it was quite a big hit and the car didn’t really feel right afterwards.” pic.twitter.com/RCU4yp4XmH

How was life on social media?

It was a busy day even though the race wasn’t always exciting to watch. F1 visualized on Twitter had a great recap of the race.

We have a weekend of rest as the next F1 race is in 2 weeks time when we head to Japan. Meanwhile, there is a bit of racing during the upcoming weekend and it is already updated on the #MsportXtra Weekend Outlook so follow @MsportXtra on Twitter or check the website. www.msportxtra.com for all the latest news.

Another #RACEWEEK coming up with @DTM at Hockenheim, @FIAWEC with the #6hFuji and @MotoGP goes to Thailand with the #ThaiGP . All timetables and more are on https://t.co/PTXuV86Ylx !! #MsportXtra