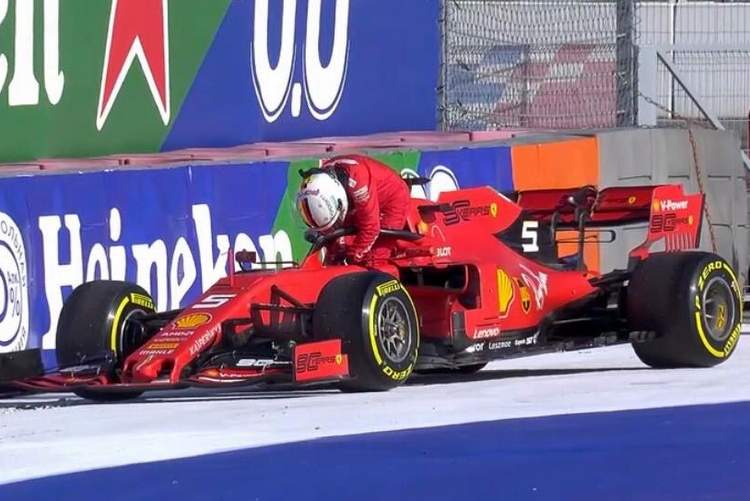 Sebastian Vettel defied ridiculous team orders during the Russian Grand Prix, on a day the German showed mighty pace, deft racecraft and earned the Driver of the Day award for his efforts which ended when he parked his Ferrari with a MGU-K issue.

With Charles Leclerc on pole it appears the team ‘arranged’ for the #16 car to tow the #5 car from the jaws of Lewis Hamilton’s Mercedes. But Vettel got himself a monster slipstream and also blitzed past his helpful teammate.

That apparently was not part of the deal and Leclerc demanded a swap, and thereafter it all got sticky for Mattia Binotto as his senior driver was clearly defying orders.

The fact that Vettel emerged behind his teammate after his first pitstop,  to nullify the matter, raises the question: Why did Ferrari make such a fuss so early on in the race when the undercut was a sure way to swap their drivers?

Alas for the tifosi, it all points to another Ferrari strategy blunder.

Speaking after he parked his Ferrari on lap 26 of the race, Vettel said, “I don’t know exactly what happened… I think we had an agreement, I spoke with Charles especially before the race, it was quite clear, maybe I missed something? I’m sure will talk about it.

“It’s bitter today because we wanted to have one-two, I don’t know if Charles was third still but it’s not the result we wanted. I don’t want to share. I don’t want to put the team in a bad light afterwards, I was in third and Charles in first and we were talking about a strategy to get past Lewis, I had a good start.

“We did race. I think that’s what we did until the pitstop because obviously I lost the lead during the stop and then the car broke down.

“Did I get the driver of the day? At least that’s something. It’s bitter because this year has been tough. I unlocked the car, yesterday Charles was quickest and I can’t be happy with that today I was on the rhythm and fastest to the stop.

“The positive today is that the car is faster. On raw race pace, Mercedes have the edge, but today should give them a headache,” added Vettel.

Big Question: How did Ferrari mess up their strategy so badly?